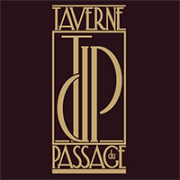 Is situated away from the daily hustle in the gallery “the King of Saint-Hubert”,

You can enjoy a pleasant atmosphere, where waiters also can attest to. With a beautiful decoration. The kitchen can offer you typical Belgian and French food: shrimp with pepper sauce, mussels (in season).

The Gallery is protected from the weather and the kitchen is open from Tuesday to Sunday.

Taverne du passage has an exceptional wine list and was the first in Belgium who won a prize for its wines.